Tim Bade helps lead our eleven to twleve minute full group.   His personal goal this year was complete a 100 mile run in less then twenty four hours.  His goal race to was 24 the hard way. He enjoys aspiring runners to help achieve their goals they have set for themselves, whether mental or physical.
Posted by RunnersWorld-Tulsa at 4:20 PM No comments:

This past Sunday I ran Turkey and Taturs for the first time. I knew this race would be challenging due to the rocks, roots, and twisty singletrack. I did not know that the hardest challenge would come from my body, not from the course, but I will get to that later.

The day dawned cool and slightly cloudy...perfect weather for a trail run! I was signed up for the 50k and Brian Hoover promptly set us off at 6:30 am. There was just enough light to see the rocks as the sun was just coming up. The races quickly spread out and I settled into an easy pace with some running buddies. We soon approached the first very well stocked aid station. It was only a few miles in so I just grabbed a couple of pretzels and ate on the run. Right after this it was onto Powerline for the first time. The group quickly separated and I was running alone.

I was feeling well and caught a friend I had met at Pumpkin Holler a few weeks ago. We wended our way around chatting and laughing while the miles rolled by. We reached the aid station at the lower parking lot where Arnold Begay and my wife were in charge. They took my jacket and gloves and I was off again. This was at about 11 miles or so. This was a crucial moment in the race. I was hungry, I felt like I was a little behind on calories, but the fun and slighly competetive nature of our running group kept me moving. Not long after this we arrived at the half way point.

I watched as my running buddies ran through the turn around and I stopped. I momentarily debated dropping from the race. I did not feel well and I had started with hamstrings that were less than ideal. I told a volunteer I was thinking of dropping. She promptly said..."well, only you can make that decision and you are the one eho has to live with it". Hmmm....ok....obviously dropping was no longer possible so I chugged some Gatorade and took off. I quickly caught up to John Nobles. He had rolled his ankle at mile 1 and he was not having the best run. We hung together for about 2 hours. We chatted and enjoyed running together. I joked that this was probably the only time ever I would see the front of him in an ultra!

We had about 6 miles to go and I was feeling a little frisky so John and I parted ways. By some miracle I ran a big portion of powerline...ok...there were some hikers and I wanted to look tough. Ha! I was now about four miles from the finish. I cruised through the last aid station and headed for home. I was pretty sick to my stomach at this point. I actually was not feeling good for the past 2 hours, but I was going down hill pretty quick.

I finally saw the bridge leading to the finish and knew I was less than a minute from finishing. Once I crossed the line Barbara took good care of me. They said I was really pale and looked pretty dehydrated. Miraculously I did not throw up, but I probably would have felt better if I had. It took about an hour or so to start feeling good. We hung around, ate, and cheered in the other racers.

This was an awesome event and one I highly recommend! I struggled because I did not listen to my body. I should have taken the time to eat, hydrate, and add some extra body glide!

Chris Owens
Posted by RunnersWorld-Tulsa at 1:43 PM No comments:

Larry Smith helps lead our full 10 - 11 minute pace group. His running goals include just having fun and encourgaing others.  He is training for Bass Pro marathon and route 66 half marathon. He just enjoys people and likes the way RunnersWorld meets you where your at to help achieve your goals.  If you havnt meet and ran with Larry then you need to take the time.
Posted by RunnersWorld-Tulsa at 5:34 PM No comments:

Eddie Carden(Rockstar) has been running ever since his ex threw away a perfectly good white boy.  He has ran a dozenish marathons or halves.  His goals are to lose a toenail, perfect his award winning calves and smoke his competitors. His goal race this year was Pumkin Holler, but I think he didnt make that race this year.  Ed wanted to be a run leader because Kathy gave him something and he felt that needed to be paid forward. He leads the 10 - 11 half group.
Posted by RunnersWorld-Tulsa at 7:24 PM No comments:

The leafs are turning and the nights are longer and the world is just cooling down...  Which means all of us who have trained hard during the sweltering heat are getting faster and running longer.  There are several great races coming up.  The number one being the Half and half, if you haven't check it out its 1/2 road 1/2 trail and has the best bling of any race out there, or at least its a very close runner up.

But its definitely my favorite time of the year to run long.  This weekend is the Mock Marathon so all of you who have trained hard for Route 66, have a practice stab at the route. Come join us! If not just enjoy the cooler temps and run long.
Posted by RunnersWorld-Tulsa at 7:16 PM No comments:

Our third annual Witch and Moan family 5k was another hit!  It was great to see all the Kiddos in their costumes.  WE had blast with the costume contest, the trick or treat zone and the 1 mile, 5k and haunted wood runs!

The kids had a donut grabbing contest and pumpkin mock up, along with running either the 1 mile or 5k all while getting candy.  If you missed out, we give prizes to age catergoeries for the best costume.  And to our volunteers we give a cash prize to best trick or treat zone.  So if your up to either challenge come out and play with us next year!! 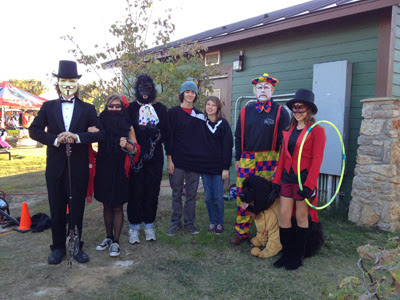 Posted by RunnersWorld-Tulsa at 4:15 PM No comments:

It was great to see all of you out there with the ten thousand!  Great turn out!  Not so great water stops.  I dont know about you all but we didnt get any water for six miles. But we had blast anyway! Thanks for sportn our shirts!
Posted by RunnersWorld-Tulsa at 3:47 PM No comments: